Hot tea brewing method: When preparing by the cup, this tea can be used repeatedly – about 3 times. The secret is to use water that is about 80-85°C. Place 1 teaspoon in your cup let the tea steep for about 3-5 minutes and then begin enjoying a cup of enchantment – do not remove the leaves from the cup. Once the water level is low – add more water, and so on and so on – until the flavor of the tea is exhausted. Look at the pattern of the leaves in the brew, not only do they foretell your fortune but you can see the bud and shoots presenting themselves, looking like they are about to be plucked.

Lung Ching Tea – also known as Dragon Well is produced by hand through a 10-part process. The side of West Lake in Zhejiang Province grows the tea used to produce Dragon Well. Dragon Well is distinguished by its beautiful shape, emerald color, scented smell and tending sweet floral character.

In China, mists and fog often compensate of insufficient rainfall, at the same time cloaking the gardens in secrecy. Here tea is produced according to ancient time-tested methods and workers perform all tasks by hand, just like their ancestors. The tealeaves that become Dragon Well (a.k.a. Lung Ching) are plucked before the Clear Light Festival or at the least before the spring rains have fallen. The choicest come from a part of the mountain called Lion’s Peak, where plucking takes place before each tender shoot has more than one leaf.

Legend has it that in 250 AD a Taoist monk affirmed that there must be a dragon lurking in a certain spring not far from Hangchow. The monk implored the well dragon to come to the rescue of the poor farmers suffering a crippling drought. Instantly, the clouds came rushing in from every side and poured forth a timely rain. One account of this, an old temple adjoining the spring is known as Dragon’s Well Monastery, and this tea derives its name from the same legend. 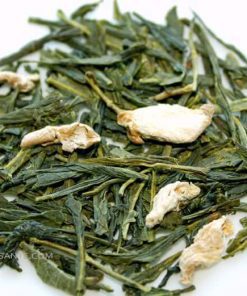 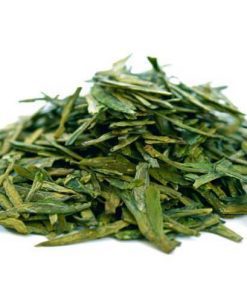