Hot tea brewing method: Bring freshly drawn cold water to a rolling boil. Place 1 teaspoon of tea for each cup into the teapot. Pour the boiling water into the teapot. Cover and let steep for 3-7 minutes according to taste (the longer the steeping time the stronger the tea).

Iced tea-brewing method: (to make 1 liter/quart): Place 6 teaspoons of tea into a teapot or heat resistant pitcher. Pour 1 1/4 cups of freshly boiled water over the tea. Steep for 5 minutes. Quarter-fill a serving pitcher with cold water. Pour the tea into your serving pitcher straining the leaves. Add ice and top-up the pitcher with cold water. Garnish and sweeten to taste. [A rule of thumb when preparing fresh brewed iced tea is to double the strength of hot tea since it will be poured over ice and diluted with cold water.

It is a little known fact that George Washington Carver (1864-1943), noted African American scientist, botanist and inventor loved tea with ginger. It’s true. What’s more, it appears that back in the day, he wasn’t alone in his love of the hot combo.

In one of his writings, Carver noted that he knew of only “one person who will not drink a cup of tea without a sprinkle of wild ginger on it.” Now, wild ginger is different from the cultivated ginger we’ve used to flavor fabulous green tea, but the sweet hot flavor is largely the same.

As a side note, Carver is also known to have written that in his opinion, ginger was the “acme of delicious, appetizing and nourishing salads.” Makes sense since ginger, which is full of volatile oils and other healthy compounds has been prized the world over for its nourishing and therapeutic qualities for millennia.

We’re sure that if he were alive today, Carver may have written a word or two about this fantastic blend of Japanese style Sencha and all-natural ginger flavoring. With its pungent, soothing cup, there’s nothing more satisfying for sipping any time of day.

A little about base tea: This tea is based on a Sencha style green tea from Hunan Province in South Eastern China. In Hunan, Sencha is manufactured according to Japanese standards in which the freshly plucked leaves are steamed prior to processing. When finished, Sencha is known for its dark green, needle shaped leaf and pale green, yellowish liquor. Like all green teas, Sencha is known to be exceptionally high in antioxidants and polyphenols. As such, recent scientific research appears to indicate that it may have an impact in the prevention of certain types of cancers. 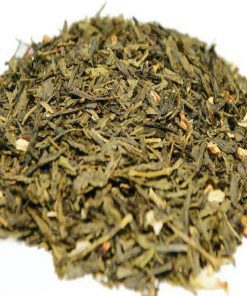 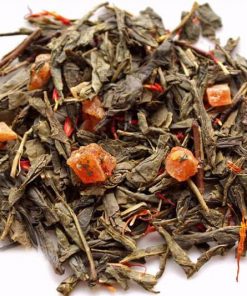 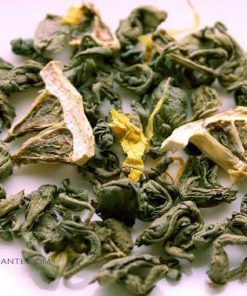